As thanks to the players who participated in WCS Austin 2017 and produced a wonderful replay pack, I’ve put together a quick analysis of Time To First Action at that event.

Time To First Action is an attempt to quantify a player’s mechanical skill. It measures the time gap between a player moving their camera a substantial distance and subsequently taking their first action. The faster the player acts – in other words, processes visual information, decides on an action, and executes – the stronger their mechanics, at least in theory. I wrote a longer piece on the concept if you’re interested.

Before we go further, remember that this is a fun theorycrafting exercise. Don’t go off and flame someone because these numbers make them look slow. 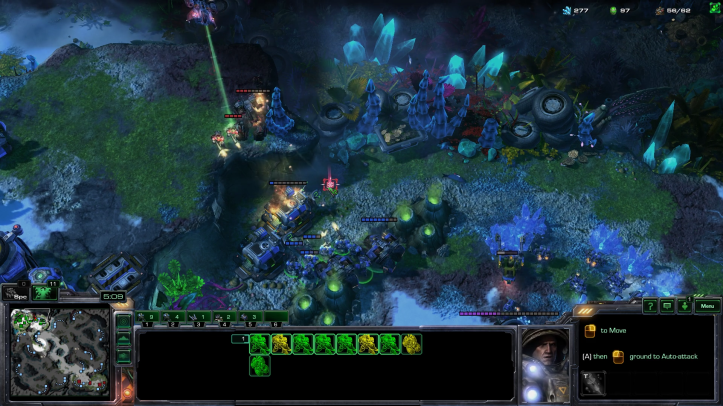 Based on the replay pack provided by Blizzard, I produced a time-to-first-action analysis of the players at WCS Austin. I grouped players by the number of game loops in-between a camera movement and an action. A game loop is a discrete unit of time in StarCraft, sort of like a clock tick. Actions in StarCraft are performed as turns – meaning, if you took two players and one executed every action 1 millisecond faster than the other, it generally wouldn’t make a difference since both players’ actions would end up in the same turn. StarCraft’s clock ticks 16 times an in-game second which, I believe, translates to ~22 times per real-life second.

(Technical details on turns in real time strategy games can be found here).

The top column is the median number of game loops in-between substantial camera movement and first action. Lower is better – it means the player reacted faster. Here’s the first batch:

And here’s the second batch:

Sadly, the hype doesn’t pan out this time around – higher APM is just as good a predictor as lower time-to-first-action.

Differences with a Regular Player

Time to First Action is a really interesting concept from a skills development perspective. We’re really fortunate that StarCraft’s replays make it easy for us to analyze.

P.S. In terms of what’s next, I’m hard at work on my next StarCraft-related project, by far the largest piece of content I’ve ever made. It’ll be out in the next few months – stay tuned!

A couple people have asked me how these numbers are calculated. I don’t release code for personal reasons, however the algorithm is straight-forward and easy to setup yourself.

I use Blizzard’s S2Protocol to read game events from replay files. S2Protocol supports a bunch of different commands, but I look at three:

Once I have a list of all the gameevents, I iterate through them. Here’s the rough pseudo-code:

Sadly, there’s no intelligence around filtering (e.g. removing the first two to three minutes of game play). Thanks to @KarlJayG for the suggestion – I’ll look into this for next time!